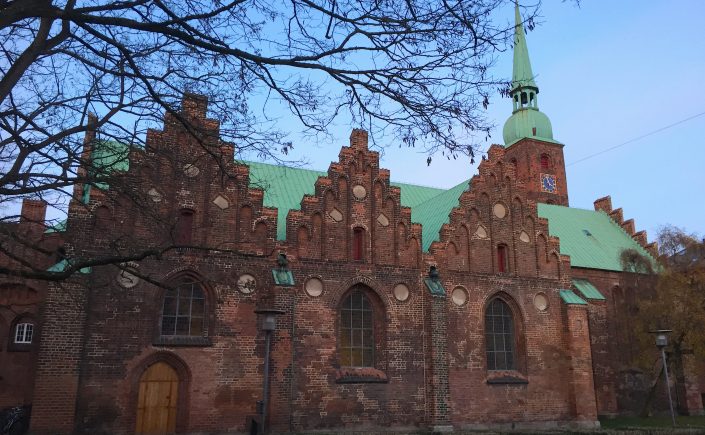 We all have traditions we enjoy before we really feel it’s Christmas. In December we visit unique places, because it means something special to us.

Let me tell you about a special place in my hometown of Aarhus, the second largest city in Denmark. We have the oldest stone church in Scandinavia – known as the Crypt Church.

The Crypt Church is a chamber located inside another church connected to a convent. This first stone church was built in the time of the Vikings. Aarhus is one of the oldest cities of Scandinavia and excavations have shown that the city was founded as early as year 770.

Because it is located near a river and the sea, it was an attractive place to settle. Also Aarhus was a junction, between the old Danish settlements of Viborg and Ribe.

Because the Vikings situated the city at the end of modern day Aarhus River, they called the city Åmunding, which means river mouth in Danish. In those days the name was Aros in Viking language, which is the current name of our art museum in Aarhus.

Disappeared in soil and rubble
In the beginning this first church in Aarhus was built as a wooden stave church like the ones from Norway. It was situated in the countryside and animals were grassing around the church.

King Frode had the church built in 930 and it is the first church described in the old records of Aarhus. Unfortunately, it burned down in 1051, and was subsequently rebuilt around 1060 as the stone church we see nowadays.

The Crypt Church has a very special crucifix called the Åby Crucifix. Åby was a place few kilometers away from Aarhus and this was where the crucifix was found. It is the oldest one ever found in Denmark. The crucifix in the Crypt Church is a replica; the original is at the Danish National Museum in Copenhagen.

From 1239 to 1541 Dominican monks looked after St. Nicholas’ Church and the Crypt Church. They built a monastery and a yard, but at some point the Crypt Church was filled with soil and disappeared under the church floor.

The Dominican monks left Aarhus in 1530 and some years later the King decided that the church and monastery needed to be a hospital for the sick and poor. The name was changed to the Church of Our Lady.

Many years later, actually as late as 1955, the Crypt Church was discovered underneath all the soil and rubble. It was restored and reopened in 1957. Now it is open to the public year around. Masses, ceremonies and weddings are also conducted in the Crypt Church.

I’m always humbled whenever I visit the Crypt Church, and in particular whenever I look at the ceiling and notice the modest but exceptional masonry. The Crypt Church is nearly a thousand years old and it was built by Bishop Christian as a Trinity Church – for the Father, Son and Holy Spirit.

A modest but unique place
For me the Crypt Church is special. I come there as often as I can. When I really need some silence and serenity I go there to contemplate and absorb the special atmosphere. It’s my spiritual place, especially around Christmas. In the Nordic winter, when it’s cold, dark and foggy this little stone church welcomes me with its warmth. I love to come there.

Primarily the architecture is unique. If you look at the ceiling, you cannot but be impressed with the masonry skills. It is modest, no doubt, but remember – this place is almost a thousand years old.

It makes me humble, and I’m glad that this Crypt Church is so well preserved. Masons made these thick walls with their bare hands for people to have a place to worship God. It really moves me.

The Crypt Church has three aisles with raw pillars. The walls and the pillars are made of tufa and boulders and have originally been covered with plaster. In some places it’s still possible to see remnants of old frescoes on the walls. The Crypt Church also has its own altar and the impression of this chamber in general is very rustic.

And when I close my eyes I can imagine how it must have been so many years ago and I can almost hear their voices again.

I love this place because it is the calmest place in Aarhus. Even though the Church of Our Lady is in the middle of the city with traffic, bustle and hordes of people, there’s always the most beautiful silence in the Crypt Church.

It’s like entering another world – a time travel where nothing has changed for centuries. In our modern day world filled with stress and fast speed, we need to sit down, breath and just be. A true meditation spot like the Crypt Church is balm for a pained soul.

My husband and I were in the Crypt Church a couple of weeks ago. We had the same beautiful experience as always and left the church with the feeling of peace and serenity.

In conclusion we sent our warmest Christmas Greetings to all of you from the serene Crypt Church of Aarhus. A treasure for sure!

The entrance to the Crypt Church can be found in the center of the Church of Our Lady where steps show the way down to the little stone church. In the end of the Crypt Church the altar is located with its beautiful Roman crucifix – it shows a portrait of a powerful King with a typical Viking moustache. Perhaps he looks like the Nordic God, Thor. 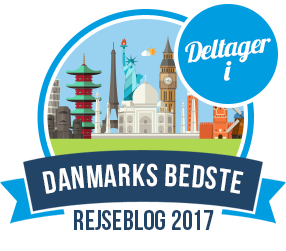