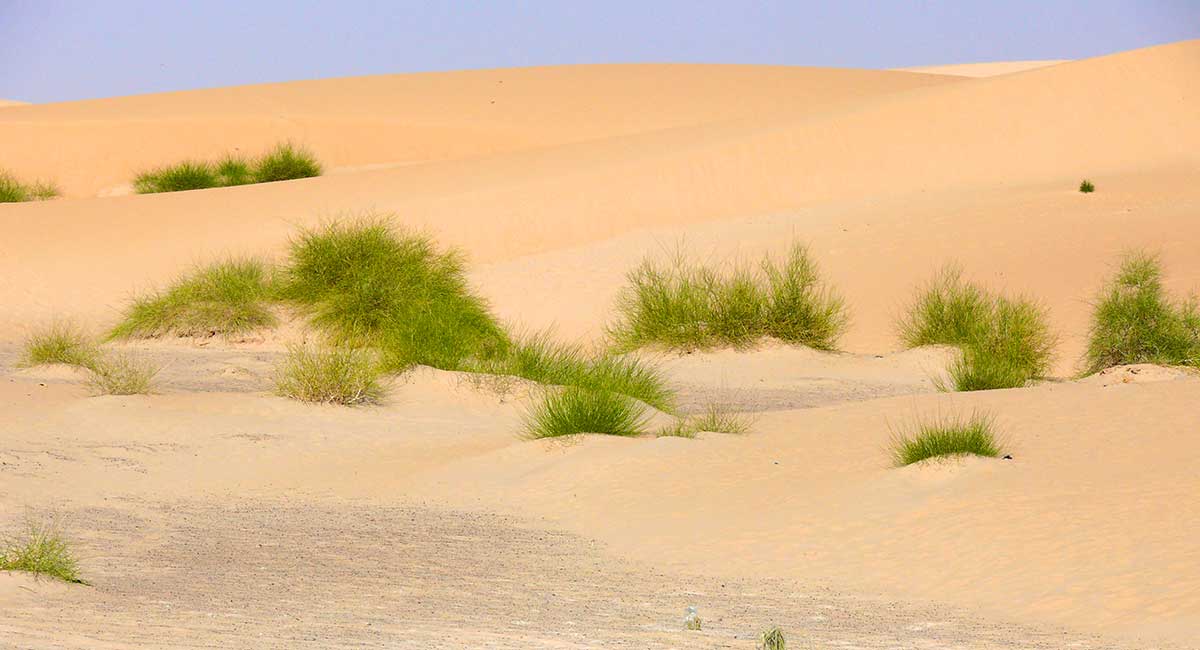 The name Sahel has a strange sound of mystery – the edge of the Sahara, the frontier of Mali’s endless desert in the heart of Westafrica. Slowly, the town of Timbuktu disappears in the horizon – its sandy lanes, mud houses and its goats bleating with longing. The camels put their soft feet in the puffy fine sand with gentle, regular steps. The ship of the desert is moving in a speed, as if it had all the time in the world.

The camel driver is Tuareg and radiates an almost buddhistic serenity and dignity far into the depth of his soul. His tanned skin and rage face is to be seen under his particular desert veil. He does everything with patience and calm, well considered movements. His barked hands tell a story and indicate many years in this inhospitable place.

They are desert nomads who do not accept frontiers of countries, a population without any place to belong. Like gypsies of the desert they live a harsh and lonesome life in this dry, isolated wilderness. Around noon, the sun is shining hot and mercilessly. The light seems white and makes your eyes tear up. In the afternoon, it is like the scenery is powdered with cinnamon and everything gets a golden, warm color. The special light and warmth, is caressing you in its embrace. It seems that one’s sense of time and orientation disappears – only the sun and the nuance of the scenery is a landmark. It feels like being absorbed by a mysterious creature, which holds you tight in its grip – and does not let you leave. Seducing and hypnotizing and carrying one away – without you discovering it.

Akmed is praying in the soft, late afternoon light. He gets down the camel, kneeling humbly, with his weather-beaten face, towards Mecca. Silent sounds and mumbling penetrate his lips. We observe him with a feeling of awe. The camels expel a gargling sound all the way from the stomach. They look at us, lazy, with eyes full of serenity; framed with elegantly curved eyelashes, while the small ears irritatingly are shaking flies away.

We arrive at the camp in the dusk. We are not able to see the town anymore – there is no light – except from a pale moon and 360 degrees around, the desert looks the same. Sand dunes with dry vegetation in pale green and brown colors are bathed in strange light. They offer us a camel skin tent, but we prefer to sleep under the wide open sky with a crowd of stars so enormous that it makes us mute. We are lying on our reed mattresses, when the dry coldness of the desert comes. The darkness appears and the fogged gigantic star constellation of the Milky Way is unfolded in all its grace.

I am listening to the foreign sounds, shiver and move myself closer to my friend, who is right next to me in his feather sleeping bag. Is a bit afraid to stay overnight in this – for us Europeans – unknown environment in this never ending wilderness. A touch of fear shows its face. What and who is walking around in the desert in the dark night? What do we know about desert nomads and star navigation? We are on foreign grounds and environment. It is enormous here – so huge that you feel small, scared and defenseless. These people are born here. The desert is their home, their territory, their “childhood town”, childhood memories – their entire soul. Some of them have never experienced the civilization, and they prefer the wide open plains and never ending silence.

Close to the creation, close to the nature and this deafening silence which is only to be found in deserts and the huge mountain ranges around the world. The nothingness – the most simple and pure form of it, a land without frontiers, outside time and space – another dimension. The patriarch of the family appears and gives us his greetings. He has extraordinary beautiful clear eyes with a rare depth, which can be seen in people who are completely in peace and harmony with themselves. I discover myself being carried away in his eyes and regular feature.

They talk about the great questions of life, as nothing but time exists here. Time, far away, from   the eternity, and all the way to the end of the world. The nature, in its most pure and unspoiled form, they worship silence as a God out here – here under the stars. They are sophisticated people, these Tuaregs – seems almost a bit supernatural; symbolic of something close to God. We got breakfast served during sunrise – the light is once again sharp. The magic of the night has vanished and the dawn has taken over. A round plate in enamel covered with flowers is given to us, with dry bread, butter, jam, and tea with sugar – the meal turns into a ceremony in itself. Veiled women come by and show us their jewellery. They show us black and indigo blue glass beads and crosses in Tuareg silver, meticulously made with filigree. We can sense a special pride. We are trying to negotiate us to a cheap price, but they refuse. It is not like in the city, where we can drive a hard negotiation and get jewelry for a bargain. They are much more self assured here and they do not want to throw their goods away to smart tourists, who do not want to pay for high quality. So we cannot hang a Tuareg cross around our neck. They have too much dignity for that and pack away their artwork.

Akmed saddles his camels with the same gentle touch and care, as he was nursing a newborn child. You feel a passionate love to the animals out here, they know their worth and that one cannot manage life in the desert without their riding and cargo camels. The ship of the desert has meant everything to these people for centuries, ever since they started the transport of salt by the caravan routes in this outpost, on the edge of the enormous Sahara desert. They even do it today. Salt caravans with up to 50 – 60 camels walk a little less than 1000 km, and are 16 days under the merciless sun through large sand dunes to sell their precious load in Timbuktu.

Slowly we ride in the lonely desert. The rear hurts because of the hard and uncomfortable saddles and the unaccustomed movements of the big animals, which are slowly walking forward in the sand. We are leaving to a place with a small lonely bush, which is not much more than a couple of dry branches coming up from the sand. A narrow fringe of shadow is found on one side of the tree. In this place, Akmed arrange a camp and he starts to collect twigs to a modest bonfire. He prepares the food and we get a simple meal consisting of boiled rice and fish in a steel bowl. We share the same bowl. It is intimate to share the same bowl. It is private and bashful, though close and secure. My friend takes a photo in sepia. He sets the camera and captures a timeless magical moment of a crackle dry little tree on a hill in the sand. The photo looks like an antique photography from a moment long time ago. A short second, a moment in the world history, which will never return.

Akmed makes tea in a little dark blue enamel teapot. We witness the preparation of a tea ceremony, which is made with an almost royal dignity. He mixes sugar in the strong syrup-like drink. Let it rest for a while and offers us the tea in a small single glass. The strong, boiling tea hurts in the throat and gives a second taste like strong pepper pricking on the tongue. The third time the tea is being mixed with boiling water it is more tasteful, more soft, gentle and delicious. The important aspect in it is the social aspect. We shared a glass, in this intimate moment, and we are in one way or another connected forever. We have shared something, which everybody offers respect to.

Suddenly, out of nowhere, there is a man standing in the sand. He has appeared silent as a ghost; he has been floating over the sand dunes. A young Tuareg man in a bright blue fluttering dress that blows in the gentle wind. He is sitting there for maybe half an hour, and they do not say more than ten words – him and Akmed. Time stands still – words are unnecessary. He is being offered tea in the small glass. They talk so silent, that it feels like mere whispers. None of them are talking louder. “The words are carried by the wind” my friend says with a dreaming look in his eyes, obviously touched by the uniqueness in the situation. This is poetry, so magnificent, beautiful and simple, that I lack words to really describe it. The whole scenery – a ghost creature is emerging from nowhere in the sand, drinks tea, says ten words so low, as the wind is blowing in the dry bushes and leaves us again as silent, as when he has arrived. I follow him with my eyes, moved and fascinated until he is gone behind the dunes. I am another human being afterwards – something has happened to me! I am richer, bigger, closer to the universe and closer to understanding. What is serenity? What is harmony? Do we have to sit in the desert sand to understand it all to the core of our marrow? It is one of these fulfilled moments, which makes it easier to let go and leave this earth one day.

Akmed is emptying the tea pot on a stone and the wet tea leaves fall out. He extinguishes the fire and packs his camel skin backpack. The camels have been walking freely around to eat, the wooden saddles have been standing like decorations in the sand. He walks toward the sunset, looking for his animals – we cannot see them in the horizon because of the keen sunlight. Half an hour later he slowly comes back, saddles up the camels and we start returning to the camp under the stars. The next day, we leave for the city – back to the civilization, the internet, the tourists, the plane ticket back to Bamako and the eager yelling salesmen at the local market towards; the noise, the chaos, the manipulation and people pushing. The silence is brutally being killed, the magic of the moment is dying, but the memory will last forever. The mind has extended and the world will never be the same again.